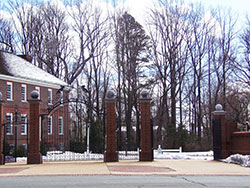 Tucked behind ornate wrought-iron gates and nestled in a park-like setting, Williamsburg Commons is a neighborhood of quintessential 18th century architecture and aesthetics in a thoroughly modern community. Each of the 38 authentic reproduction homes has its own unique character, based on the architecture of Colonial Williamsburg but adapted for modern living. Great care has been taken to ensure the 18th century feel, down to such details as the Flemish bond brickwork, custom moldings, and the aggregate road which mimics colonial gravel pathways. 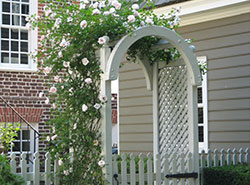 The homes face onto a beautifully landscaped mall bordered with brick walkways and picket fences. Formerly a nursery, the community nurtures many species of mature trees and shrubbery, creating a serene environment for residents, birds and the occasional wildlife. Enhancing the tranquility, cars are hidden from view behind replica carriage houses or strategic landscaping. In these peaceful surroundings it’s easy to forget we are just minutes from the Metro, Tysons Corner and major routes into the city.

Fostering a sense of community, residents gather several times a year, whether at the neighborhood pool, family activities on the Commons, or the spontaneous cocktail hour on a neighbor’s front stoop. A truly unique community, Williamsburg Commons is a hidden gem in the suburbs of our nation’s Capitol.